Foxglove Sketch
It's around this time of year when a few native pink-purple foxgloves - digitalis purpurea - appear in the garden.
My earlier post, in which I made reference to the Flower Fairies' illustrator Cicely Mary Barker, reminded me of these sketches that had been filed away; inspired by such charming paintings as the little Foxglove Fairy and Beatrix Potter's foxglove studies in different styles, I embarked on 'getting to know' my foxgloves.
I sketched this little wildflower family repeatedly over a week or so, starting with its silhouette at first light of the day and finishing when it was bright enough for me to see what I had been looking at.
My only distractions were the morning fair-weather friends, my dog and two cats, who took to relaxing on me and against me, after their early breakfast, before they cleared off in search of some mischief. 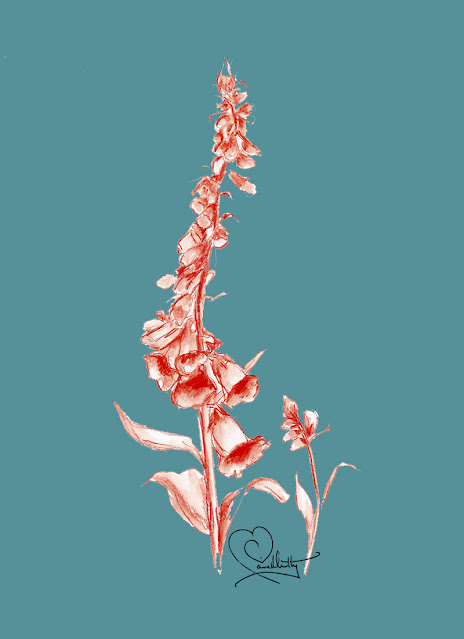 Foxglove Sketch: ink purple native foxglove with a red aqua pencil.
The sketches were done with a red water soluble pencil and an aqua brush. I love the rich, creamy texture of aqua pencils when mixed with the smallest drop of water and the way they can instantly bring a sketch to life.
It was the stalk that I found most difficult to draw - at times my paper filled with unnatural, squiggly lines taking up more space than the sketches. It can be quite a challenge sometimes, to draw a natural-looking line that captures the line of a stalk that is quite naturally unnatural-looking..
The turquoise background, that I added later, brightens up the sketch for a more stylised effect in the post; I will be releasing some greetings cards based on this design, along with some bees, as part of a collection of wildflower greetings cards.
***

Otter Painted in Stages in Pastel

The National Honey Show 2020 UPDATE.
SAVE THE DATE: 22nd - 24th October 2020
Due to Covid-19, the National Honey Show will now take place as an online professional conference open to the public and free of charge.
It will be a three day event with a host of activities, lectures, demonstrations and the buzzing trade show, even a live Q&A 'chat' feature to ensure everyone feels part of the hive!
More information will follow soon.