Squirrel Painted in Stages in Pastels

A few notes on an instinctual approach to painting wildlife - where regret and doubt are managed through review and change, as part of the natural process of getting it right.

First, I set out and sketched the planned painting. That was just to get it moving - once I start using the pastels I don't necessarily keep to the original sketch, as paintings often seem to take on a life of their own at some point.

Next, I added a little general colour, here and there, to get a feel for the work ahead and an idea of the squirrel's form. Chalky, soft pastels shift each time they are blended, so they can continue to be mixed on the paper until the colour is right.


Then, some time was spent securing the main features, such as the eye and ear. Once I was happy with them, I filled out some of the squirrel's form overall - to anchor the body on the page.

The tail and face were the main areas I wanted to make to stand out from the painting. Then more colour was added to develop the contour of the body. 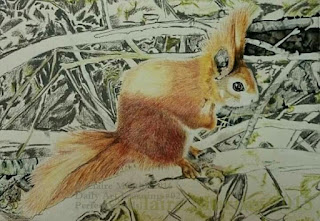 As the squirrel was detailed ... it dawned on me that I had a lot of work ahead with the background, which was also going to be detailed...


“Our doubts are traitors,
and make us lose the good we oft might win,
by fearing to attempt.”
(William Shakespeare, Measure for Measure)


I had also started to accentuate the shadow across the squirrel's body – and wondered if it was the right thing to do -  but I added it anyway...

Then, in contrast to my usual approach, I took some of the detail out. This worked well, as it added depth to the painting and...luckily...it also balanced out the dark shadow across the squirrel's body. 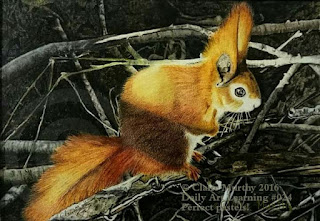 I quite like that bold stripe. It features the play of light and dark across the squirrel's body - and gives the whole painting a sense of the squirrel and viewer playing 'peek-a-boo' between the shadows of the trees.

I called it 'Catching the Rays' - with the squirrel itself, a mighty sunbeam!

The wildlife challenge for today's wildlife nature blog was set by the 30 Days Wild : Scale to Great Heights. In other words - climb a tree. 30 Days Wild wildlife blog : Squirrel climbing a tree. Wildlife Nature Challenge : Climb a Tree Sometimes it's nice to take the easy option and let the professional do it. For the #30dayswild post in 2016, Nature Challenge : Scale to Great Heights , click here .
Read more...»
Out Now!

You'll never look at a garden bird again without a smile!