The second book in this beautiful children’s story about a small garden bird was published a few weeks ago - I added some information about it over at Claire Murthy Studio and thought I had better also post something here soon - before book 3 is published in a few day's time!

So, a few details from the latest book about one of my favourite garden birds - the little robin redbreast!

This book is for slightly older readers, suitable for 7 or 8 year olds upwards.

Robin has been rescued from being eaten by a cat and is now facing a difficult time ahead with thoughts of being stuck indoors. He is excited to have been saved from being eaten by the cat and now can't wait to be freed to get back to his local woods - but first he must get through the rest of the week!

Once again, though, things aren’t going to go his way...

'Any assessment would have to start… With Bird’s little beating, pounding HEART…'

Robin’s life has changed and, after a visit to the vet, he finds himself with mixed views about staying indoors while he recovers. The weather is starting to get colder outside and if he stays indoors for much longer he will really feel the cold winter when he is released but if he can't be released now he might have to wait all winter until spring to be free again.

He spends time thinking about his situation and finds himself wondering if the comforts of living indoors might suit him better than surviving the cold winter days ahead as a wild bird fending for himself.

With a small sprinkle of imagination and a little humour, this charming tale about kindness, friendship and determination invites readers to follow Robin’s adventures and the challenges over his first week in captivity.

The poor robin was saved

From his fate with a cat,

Who was out hunting birds -

Not asleep on the mat.

Now hoped to be freed

'An Important Week' is the second book of six in a children's fiction book series, Robin RoseHip: A Bird's Tale.

Key points about the book:

Each chapter is written in rhyme which tells the story

Suitable for a range of ages

An engaging story to read out loud

All about a loveable robin.

Book 3 'Mischief and Mayhem' will be released in August!
​

The wildlife challenge for today's wildlife nature blog was set by the 30 Days Wild : Scale to Great Heights. In other words - climb a tree. 30 Days Wild wildlife blog : Squirrel climbing a tree. Wildlife Nature Challenge : Climb a Tree Sometimes it's nice to take the easy option and let the professional do it. For the #30dayswild post in 2016, Nature Challenge : Scale to Great Heights , click here .
Read more...»

Any assessment would have to start… With Bird’s little beating, pounding HEART… 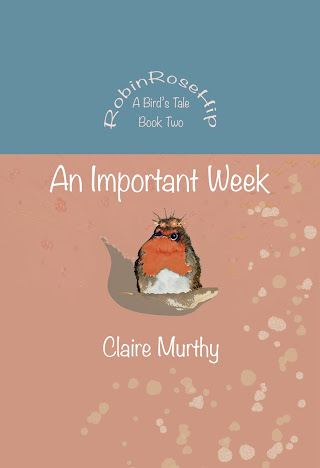 You'll never look at a garden bird again without a smile!